'Tired of fucking around' 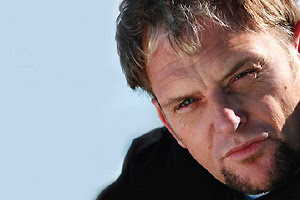 Steve Hofmeyr has always had an opinion on current affairs in South Africa, but his open letter to Julius Malema kicked the hornet's nest of South African opinion.

iafrica.com asked Hofmeyr if he has any regrets about his letter, whether he agrees with Eugene Terre'Blanche's political ideals, and why he thinks Afrikaans culture needs protection.

You've said some pretty inflammatory things over the past couple of weeks. If you could, would you take any of it back?

I would certainly rephrase the "black" generalisation. Mine was in an open letter to Julius Malema and his hypocritical ilk. It remains deceitful bigotry to defy the West as well as benefit from it. You cannot do both. And this is my problem with Fat Black Hypocrites. His reaction to the BBC man's question about owning a house in Sandton betrays this. But, despite my apology, black folk are not entirely honest about their ancestors' contributions.

The ANC has called Julius Malema into a disciplinary hearing, do you think that your open letter to Malema contributed to this?

I hope so, but I doubt it. Malema has seriously damaged tourism and World Cup prospects. I have an entire circle of friends who cancelled their tickets after his fatwa on Afrikaners.

What action would you like them to take against him?

Whatever the law prescribes. Nobody is unreasonable about this. He is guilty of hate-speech and by implication, murder. But the latter cannot be proved.

Do you think that the Afrikaans culture needs more protection than any other culture in SA? If so, what sets it apart?

Statistics set it apart. Widely apart. Post-struggle euphoria finds karma in marginalising that culture and its contributions. But while everyone is having a laugh at my inflated reactions, "foolish" rightwing rhetoric and AWB costumes, our mortality rate as a tribe, borders on genocide. Lives lost are not okay under any circumstances in any demographic, but this is ridiculous.

You attended Terre'Blanche's funeral and have mentioned that he was a friend. Do you agree with the values that he stood for?

We agreed on no politics at all. But I did meet the pacified ET, after his sentence. With changing values. But his values as a cultural icon were beyond reproach. His other less admirable traits were always in defence of what he thought was the Boerevolk's land, the old republic's, legally obtained, by the way. What has been laughed off as rightwing rhetoric has actually yet to be answered. Calmly and with sobriety. I wanted to mediate that debate.

Do you think that most Afrikaners are sympathetic to Terre'Blanche's ideals?

Impossible to say, but the small AWB membership does not account for the thousands of travelling mourners to Ventersdorp on funeral day. Our Constitution should take care of folk even if only two arrive as a minority grouping. It may be that more folk see him like I do: the embodiment of a once proud Boerevolk who on their day defeated larger and stronger armies for their place in the sun; who sang from the Psalms&Gesange without opening those books; who bought traces of civilisation to sub-Saharan chaos; who spent centuries with their fingers digging into drought-stricken land to heed crops; and who mobilised against the odds following the whispers of their God. It may not all be relevant today, but it is the heritage that got me here and for which I shall fight for.

What are you hoping to achieve through your political activism?

The Break Even Point. True redemption. Where South Africans admit that no amount of compensation can alleviate the pain or bring back the dead. That all suffered in turn sometime.

Professor Es'kia Mphahlele said in 1990, "Our commitment to the Afrikan [sic] landscape goes deeper because we have a spiritual bond to it, having suffered for it".

We find Break Even Point and carry on from here as New South Africans without patronising each other with rights to entitlement, tenderpreneurs, nepotism, BEE, quotas and affirmative action. It's sickening and dreadfully uneconomical. This floundering economy cannot be saved with poverty-stricken masses being milked dry by self-enriching, unaccountable governments.

If Malema came over for a braai, what would you chat about? (And what food would you serve?)

We'd compare lists, simply because he doesn't think a white man is entitled to a list. I'd certainly have my mom over to slap some manners into his face. The food is the peace pipe. It's secondary to the chat. It's also my reconciliatory gesture — but I won't hold my breath.

Do you think that white South Africans — or indeed Afrikaners — can all be lumped together in one big cultural group?

Only those who want to. And nobody qualifies to excommunicate anyone else from membership. I meet plenty English folk too who feel the need to be proud of their white heritage without being labelled a racist. But I cannot be a proud South African if I cannot be a proud Afrikaner. It's not debatable.

How do you think South Africans can go about healing the rifts that have appeared over the past few weeks?

We embrace the tougher South Africa. The one where open societies meet and confront each other's toughest concerns. The very braai we should have had 15 years ago. I'm tired of fucking around.