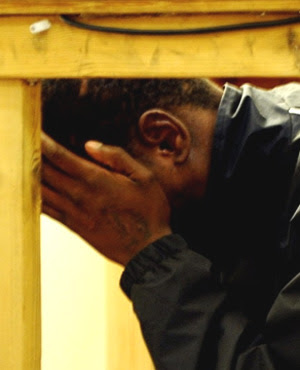 Chris Mahlangu, who is accused of the murder of Eugene Terre'Blanche, hides his face during his court appearance in Ventersdorp. (Alexander Joe, AFP)

Ventersdorp - Eugene Terre'Blanche's murder, over a wage dispute and missing cattle, was planned in the stables of his farm, the Ventersdorp Magistrate's Court heard on Monday.

"They planned to kill Mr Terre'Blanche... They planned: 'this man is giving us trouble, we are going to kill him'," said investigating officer Ttietsi Mano during the bail hearing of farmworker Chris Mahlangu, 28.

He and a 15-year-old youth have been charged with killing the rightwing leader on Easter Saturday this year.

The court heard on Monday that the two went to the stores for an iron rod, and broke into the farm house.

They attacked Terre'Blanche while he was sleeping, using the rod and a panga.

Mano said Mahlangu pointed out the murder scene to police, and this was regarded as a confession.

Mano testified after doubts at the weekend over whether he would stay on the case following his arrest for allegedly assaulting witnesses in other investigations. He is out on bail.

Prosecutor George Baloyi said Terre'Blanche was struck several times in his face, head and body, with the weapons, according to a provisional summary of facts.

He suffered 28 injuries to his face, brain, tongue, skull, ribs and liver during the attack on his farm.

After the murder, the court heard, the two took Terre'Blanche's cellphone then went to "brag" about killing him.

"They met three people and accused number one told them that he is now their boss because they have killed Mr Terre'Blanche," Baloyi read from a summary of facts, which Mano confirmed.

But the other farm workers did not believe them.

Crimen injuria, initially explained as being included because he was found dead with his trousers down, was not on Monday's list of charges.

Teen will plead not guilty

The 15-year-old made a brief appearance earlier and his lawyer said outside court that he had left school in grade seven to work for Terre'Blanche at a salary of R500 and a bed in the stables.

Terre'Blanche, a keen horseman who made appearances at shows around the country, had hired the boy to look after his herd of 97 cattle and also gave him a meal of pap and milk, and occasionally meat, said his lawyer Zola Majavu.

The boy would plead not guilty when he returns for his own bail application on June 10 and then go on trial in a high court in September.

Terre'Blanche's brother Andries, as well as Afrikaner Weerstandsbeweging (AWB) secretary-general Andre Visagie, were among those present at the long-awaited bail hearing.

The AWB saw the murder as proof of the dangers of ANC youth league leader Julius Malema's singing the lyrics "shoot the boer", and farmers say the murder proves that they are being targeted.

- Are you there? Send us your news and photos